In the gloom of an underground cell at the site of one of the greatest horrors in history, Pope Francis sat alone, head bowed, in silence.

A dim lamp threw light on to his hunched shoulders, clad in papal white. The bars of the cell door cast shadows along the stone floor, and a cross was faintly scratched in the wall.

Seventy-five years ago, when Francis was a four-year-old boy called Jorge living in Buenos Aires, this cell at the Auschwitz Nazi death camp was occupied by prisoner number 16770, Maximilian Kolbe, a Franciscan friar.

When 10 fellow inmates were selected to die in punishment for the escape of another prisoner, Kolbe stepped forward and volunteered his life instead of that of Franciszek Gajowniczek, who had cried out in anguish for his wife and children. Kolbe’s offer was accepted. He was thrown into the starvation bunker for two weeks and finally given a lethal injection on 14 August 1941. 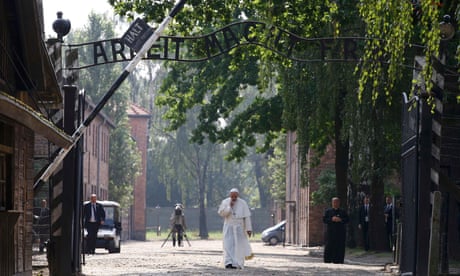 The pope came to Auschwitz on Friday to pray in silent memory of Kolbe and the other 1.1m people the Nazis exterminated there. Jews made up the vast majority – 960,000, including 185,000 children – but thousands of Polish Catholics, Roma and Soviet prisoners of war were also put to death.

He had signalled his intention to visit the memorial “without speeches, without crowds”. His simple plan was: “Alone, enter, pray. And may the Lord give me the grace to cry.”

In the shadows of the cell, his long silence was an eloquent tribute to the suffering of so many and a profound condemnation of evil. At the end of his prayers, he raised his head, crossed himself, stood and left.