‘Trump and Putin could end the world today’

The ever-present possibility of an unintended or unforeseen conflict flaring up increases fears among defence analysts over how Trump might respond without experienced figures like Mattis at his side.

“President Trump has yet to be faced with a true international crisis,” said Alexandra Bell, a senior policy director at the Centre for Arms Control and Non-proliferation. “His behaviour and actions give little hope that he’ll react to pressure with calm resolve.”

Bell pointed out that under the US command and control system, there is no institutional brake on Trump ordering a nuclear launch.

“The world must also come to grips with the fact that we have placed an inordinate amount of faith in the ability of individual leaders to behave rationally. By choice or miscalculation, President Trump and President Putin could end the world today and there’s little any of us could do to stop them. What’s worse is that’s the way we designed it.” 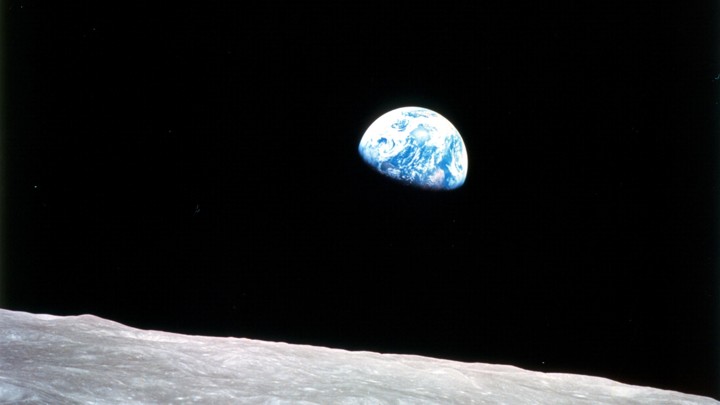 Also from The Atlantic

„Fifty years ago this month, the three-man crew of Apollo 8 swung around the moon’s far side and encountered a vision never before seen by human eyes: the sunlit Earth, juxtaposed against an ashen lunar plain, and a backdrop of infinite black space.

Frank Borman, Apollo 8’s commander, has expressed frustration that he and his fellow astronauts failed to convey, with words, the cosmic import of their experience. “I don’t think we captured, in its entirety, the grandeur of what we had seen,” he once said.

By the time Apollo 8 splashed home in the Pacific, writers had already tried to bridge the gap between the astronauts’ limited literary powers and the extraordinary sight they beheld. “To see the Earth as it truly is, small and blue and beautiful in that eternal silence,” the poet Archibald MacLeish wrote in the Christmas 1968 edition of The New York Times, “is to see ourselves as riders on the Earth together, brothers on that bright loveliness in the eternal cold, brothers who now know they are truly brothers.”

Many literary interpretations of this new motif—the astronaut gazing back at Earth—would follow. But perhaps none has surpassed a two-paragraph passage in Don DeLillo’s 1983 short story, “Human Moments in World War III,” about two men aboard an orbiting military space station, one of whom becomes entranced by his view of Earth through the station’s window. The planet “fills his consciousness,” DeLillo writes, “the answer to a lifetime of questions and vague cravings.”

Vollmer has entered a strange phase. He spends all his time at the window now, looking down at the earth. He says little or nothing. He simply wants to look, do nothing but look. The oceans, the continents, the archipelagoes. We are configured in what is called a cross-orbit series and there is no repetition from one swing around the earth to the next. He sits there looking. He takes meals at the window, does checklists at the window, barely glancing at the instruction sheets as we pass over tropical storms, over grass fires and major ranges. I keep waiting for him to return to his pre-war habit of using quaint phrases to describe the earth: it’s a beach ball, a sun-ripened fruit. But he simply looks out of the window, eating almond crunches, the wrappers floating away. The view clearly fills his consciousness. It is powerful enough to silence him, to still the voice that rolls off the roof of his mouth, to leave him turned in the seat, twisted uncomfortably for hours at a time.

The view is endlessly fulfilling. It is like the answer to a lifetime of questions and vague cravings. It satisfies every childlike curiosity, every muted desire, whatever there is in him of the scientist, the poet, the primitive seer, the watcher of fire and shooting stars, whatever obsessions eat at the night side of his mind, whatever sweet and dreamy yearning he has ever felt for nameless places far away, whatever earth sense he possesses, the neural pulse of some wilder awareness, a sympathy for beasts, whatever belief in an immanent vital force, the Lord of Creation, whatever secret harbouring of the idea of human oneness, whatever wishfulness and simple-hearted hope, whatever of too much and not enough, all at once and little by little, whatever burning urge to escape responsibility and routine, escape his own over-specialization, the circumscribed and inward-spiralling self, whatever remnants of his boyish longing to fly, his dreams of strange spaces and eerie heights, his fantasies of happy death, whatever indolent and sybaritic leanings, lotus-eater, smoker of grasses and herbs, blue-eyed gazer into space—all these are satisfied, all collected and massed in that living body, the sight he sees from the window. 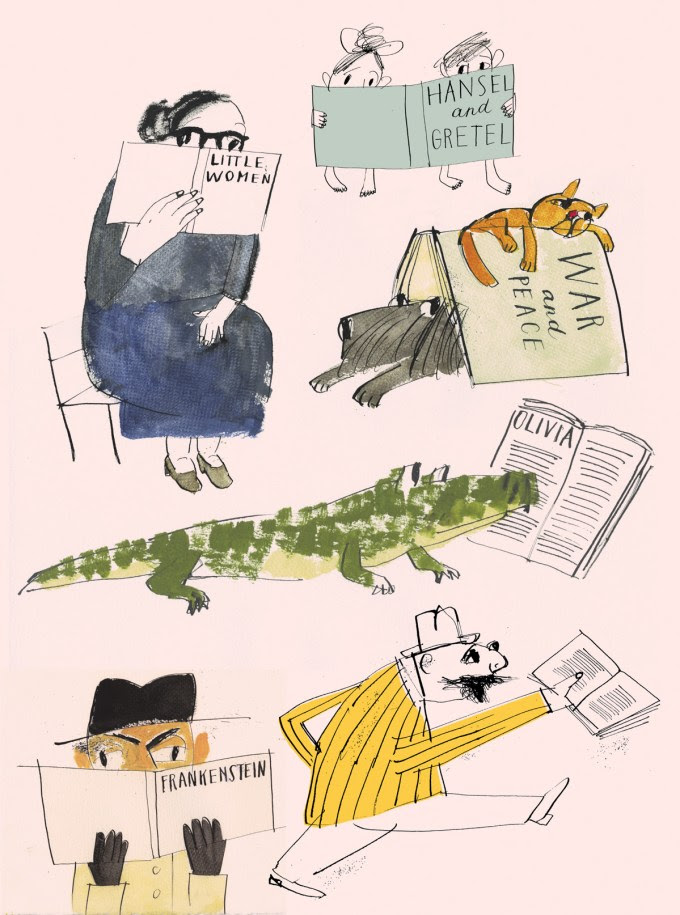 Art by Vladimir Radunsky for a letter by Ann Patchett from A Velocity of Being: Letters to a Young Reader.